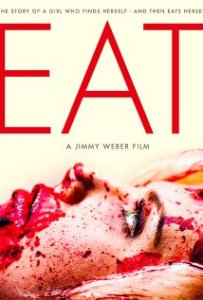 Every so often I watch a movie that leaves me feeling flabbergasted; the impact being so overwhelming, my surprise, shock and awe makes it difficult to gather my thoughts, let alone articulately write them down.  Eat is a movie I feel all horror fans should see; the content might be too much for some to stomach, but writer and director Jimmy Weber has such an great mind for horror that he deserves to be on the radar for years to come. Like I said, Eat might not be for you, but one day he’ll probably make something that is.

Meggie Maddock stars as Novella McClure, a struggling actress in Los Angeles struggling to make ends meet as she chases an elusive dream. It’s been 3 years since her last role, she can’t catch a break without degrading herself to sexual objectification and she faces eviction from her apartment. Furthermore, she’s developed a nasty habit of eating her own flesh whenever she’s feeling stressed.  On top of that, her best friend Candice is an overprotective psychopath with an itchy trigger finger and her love interest also happens to be her therapist.  Novella is on the verge of self-destruction, and her hunger grows as her life deteriorates.

On paper, Eat bares a strong resemblance to Starry Eyes (reviewed here): both were released in 2014; both protagonists are struggling actresses who can’t handle rejection, trying to find success on their own terms in a seedy Hollywood; both contain elements of visceral body horror.  Furthermore, both explore how damaging it can be to a persons well-being to pursue a dream.  Eat and Starry Eyes share some comparisons, which is coincidental and unfortunate; despite their similarities, they have very different stories to tell.  However, while Starry Eyes has gone on to receive recognition and critical plaudits, Eat has slipped under the radar.  All I’m trying to say is, don’t skip one because on paper it looks like the other.

Eat, like all good body horror should be, is an endurance test that may induce vomiting; the scenes of self-cannibalizing aren’t pleasant to watch. Why should they be?  A woman eating herself isn’t supposed to be easy to stomach.  Even if it does make you a little hungry and want to try it home because biting your fingernails just isn’t cutting it anymore.  Moreover, those sequences are matched with an unpleasant industrial score and voice overs that remind us of the harsh words that drove her to it. 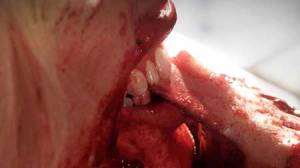 The score deserves special mention: in moments of quiet it’s very soothing; sometimes even beautiful.  But when things take a turn for the bad, it changes to an audio sledgehammer to the senses that perfectly compliments the disgusting cannibal carnage on screen.  The movie ends with a track called, ”They See Me”, a beautifully haunting, dreamy piece of music that’s been on shuffle for me since the end credits rolled.  It’s a perfect piece to end the movie on, and one that plays in your head as you contemplate what’s just transpired over 90 minutes.

Eat is a gruesome and disturbing move; it’s also a movie with moments of beauty spliced through the grim.  On top of being a gory delight, it’s rich in social commentary and layered main character played excellently by Meggie Maddock, who, unlike her character, will never struggle to find roles due to her angelic beauty and undeniable talent.  Jimmy Weber, like I said earlier, has a mind for horror.  Eat is a well informed reflection of society with an original concept.  It’s a gem of a movie that deserves to be acknowledged, but right now I’m just happy I discovered it.  8/10.