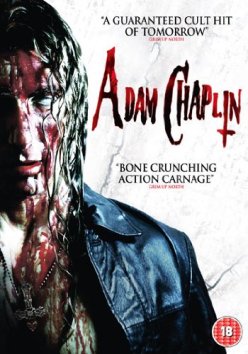 They say we fall in love when we least expect it – and after watching ”Adam Chaplin”, I can wholeheartedly relate to this sentiment.  Every once in awhile, you stumble upon a movie that caters so well to your tastes. you think it was made just for you.  That’s the feeling that overwhelmed me when watching ”Adam Chaplin”, the manic action-horror hybrid revenge story from Necrostorm – an Italian film production company who specialize in gore and insanity.  Inspired by Japanese manga and violent B movies of the 1980’s and 90’s, this self-proclaimed ”Italian gore extravaganza” is an amazing triumph of micro-budget cinema.

Set in the fictional country of Heaven Valley, the film tells the story of Adam Chaplin – a demonically possessed vigilante with superhuman strength hellbent on avenging the death of his wife, who was burnt alive at the hands of Denny, a sadistic mob boss who is impossible to touch.  With a corrupt police force and a hired killer on his case, Adam and his demon sidekick must slaughter their way through their foes before vengeance can be claimed.

To compare ”Adam Chaplin” with other movies, I’d say it’s a combination of ”The Crow (1994)”, ”Faust: Love of the Damned (2000)”, ”Riki-Oh: The Story of Ricky (1991)” and ”Fist of the North Star (1986)” to name a few.  Essentially, it’s a comic book come to life: the story is a Faustian tale of revenge, with cartoonish characters in a city ruled by crime and corruption.  The villains are grotesque, maniacal and savage, whereas Adam is a trench coat clad killing machine who can punch through faces. Visually, it’s dark and grimy, with an ever present blue flair which further enhances its comic book aesthetic; this provides a stunning contrast to all of the crimson splatter, which sprays, splurts and slithers in gallons.

Gore is the obvious appeal of a film like ”Adam Chaplin”, and it makes sure to bring it to the forefront whenever possible – which is often as the story was tailor-made to include as much visceral carnage as possible.  Blood sprays, limbs are torn and heads are bashed; eyeballs and brains are squished and allowed to pour out from skulls and lay with rotten carcasses.  However, the plot – as thin and simple as it may be – makes for an engaging story to be told.

The film is a showcase of practical effects, which look absolutely outstanding considering the budget they were working with – which was less than the daily catering of a Michael Bay movie.  I imagine this will be very inspiring to any up and coming horror filmmakers.  At times it is a little rough around the edges, but the sheer ambition of the project – as well as the heart and effort put in – is so incredible it blurs out its minor flaws.

”Adam Chaplin” is the type of film many horror fans yearn for: a violent, frenzy of bizarre madness that’s so off the rails you wonder if it was even on track to begin with.  It’s a balls-to-the-wall splatter fest full of non-stop action at its most hyper and deranged.  It’s style over substance at its most entertaining and a sure fire cult classic of popcorn entertainment. Necrostorm are bringing Italian splatter back to prominence in the 21st century.  And they’re doing so with style.  8/10